… a lot: mostly, historical fiction. Open the Menu on the upper right corner to learn about my books and the people and places in them.

A Formula for Trouble

Last night we had a little chemical interaction explode up here. It’s an outcome that’s been brewing for a long time and turned dangerous. We’re lucky no one was hurt. 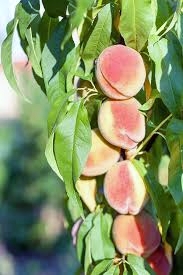 area, maybe 25 feet from our house. Jump ahead about five years and in mid-August, my sharp-eyed daughter-in-law spotted the resulting tree and picked two dozen juicy, very tasty, tree-ripened, completely unexpected peaches. That tree reproduced through its fallen fruit and soon new peach trees appeared on the hillside. Fascinated by the idea of an all-volunteer orchard, we thinned them to four and let them grow in the rough with minimal care. About three years ago, we picked five bushels of pretty nice peaches (some wormy: most not). That was many more than I could handle. I did what I could, decided ruefully I’m not the country mama I’d like to think I am, sighed, and went back to my writing. 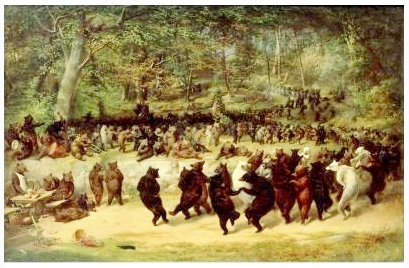 Though not as many nor as fanciful as in this 1870 William Beard painting, there’ve always been bears on our forested little mountain. When we moved here long ago, many of our neighbors kept hounds for hunting, and every year bear hunting season was highly anticipated. Our nearest neighbors told me that they tried to can or freeze the meat of at least one steer, two hogs, one bear, and several deer annually. That plus garden produce could feed them for a full twelve months

Occasionally, but not often, we’d see a bear passing through our yard or in the woods. It was a rare event— kind of exciting, but not threatening. We and the bears just carefully left each other alone.

Time has passed quickly. Our neighbors’ traditional way of life is pretty much gone now, and I’ve mourned at many funerals for our old, dear friends who made us feel so welcome here. Now, it’s unusual for hounds to run baying through the woods. At least, the place is more pleasantly quiet.

With less hunting going on, eastern black bears are flourishing in this area. I kind of like bears and I feel we’ve coexisted with them pretty well since we learned, long ago, to keep our trash inside until “Dump and Recycling” day. Other than a raid on the chicken coop, we’ve had little bear trouble until last night. 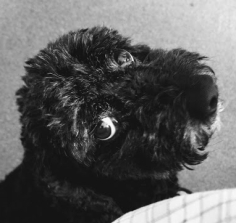 Our cockapoo Lexie is a small one, only 15 pounds. She’s my shadow and a great companion. She’s friendly, sweet, cuddly, mostly well-behaved and cute as a button. She looks frolicsome and joyous romping through summer grass trying to catch butterflies. But her cute puppy-ness hides a dark side. Though she’s the product of two over-refined miniaturized pet breeds, Lexie is an oddly fierce, dedicated hunter. When something catches her attention—be it dragonfly, frog, or skink, fortunately not snakes—she’s implacable in the chase. Like many pet dogs, when her Whitefang spirit’s in control she loses what little common sense she has and completely forgets her size. This delusional over-confidence is at its worst when I’m there with her.

The Catalyst: Good Mothering by a Bear 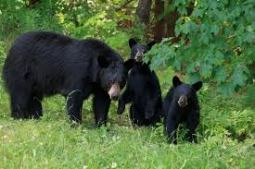 These volatile elements mixed and blew up when we went outside last evening. Lexie ran away from me toward the fruit-laden trees. She was barking loudly and wouldn’t come back to my calls. Suddenly, she did come back to me, her short legs scrambling for speed and about 130 lbs of angry bear on her heels. The bear hesitated a second at the edge of our concrete walkway then charged ahead on it, toward us.

I’d been calling from the kitchen doorstep and had just enough time to hustle myself and Lexie, who was brave again in my presence, into the house. Madame Bear followed her right up to our door, which I shut as quickly as I could, almost literally in her face. The bear watched us intently as I pushed the madly barking dog out of the mudroom and into the kitchen and closed that door, too. Madame Bear stood up on the doorstep and took a tentative swipe at the glass with her paw as if to see if she could go further, then dropped down and walked away.

It turned out we were encountering the proverbial mama bear with cubs who quite reasonably decided that Lexie was a real threat. I can’t blame her.

This morning, the bear and two cubs were back in the peach trees, and I was able to get this I’m-sorry-it’s-not-better photo from safely indoors through a window-screen. By my side, Lexie had changed into Whitefang at the bears’ scent and started 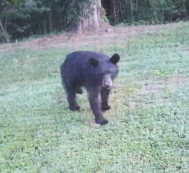 barking. Immediately, the cubs climbed trees on the slope and mama bear left them, the peaches, and the woods behind her again and walked up our lawn in a determined way, toward Lexie’s barking. I pounded the windowsill and shouted at her, and she slowly turned and went away, her two cubs following. They’re gone for now, but I’m sure they’ll be back soon for more peaches.

This is a serious problem. It kept me awake last night until I formulated: The Plan.

Plan Part One Miss Lexie will henceforth go out only on a leash, and only when there are no bears evident. This’ll continue until the fruit is all gone and well past that time.

Plan Part Two  The peach trees are bear attractants and need to go. We’ll cut them down this fall and maybe also our cherry trees, which draw bears in the early summer. I’d rather have safe dogs than fruit trees.

Plan Part Three  I have to stay very aware that Lexie Whitefang the Hunter just isn’t as smart as Lexie the Sweet Cockapoo is. She doesn’t make good decisions when she’s excited. This is all my bad–I sort of knew it could happen but didn’t think about how to handle it in practice. Lexie could’ve been killed or could have injured one of the cubs and then be killed.

Plan Part Four  Our Miss Lexie needs to understand that she’s an overbred,  sheltered little dog, not Whitefang the mighty hunter. I’m not confident she’ll ever believe that. We’ll have to see.

Are you having bear adventures this summer?

The images on this post are public domain from Google Images, except for the Beard painting, which came from the New York Historical Society https://www.nyhistory.org/exhibit/bear-dance, and my one good photo (of Lexie) and terrible through-the-screen photo and the glass door photo.