… a lot: mostly, historical fiction. Open the Menu on the upper right corner to learn about my books and the people and places in them. 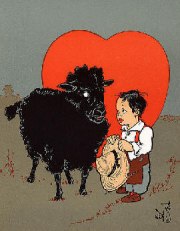 Writing reasonably good historical narrative requires doing a lot of research. These days, information is so readily available on the internet that research can be wider as well as deeper without time and resources lost traveling to physical libraries around the country or the world. This is a great boost, and also takes me to interesting topics I might not think to pursue otherwise.

A good example: nursery rhymes. We all know them, we grow up with them and we recite them to our kids. But… what do they mean? The site

contains some wonderful articles about the origin of English nursery rhymes.  Below is a clip: their write up about a favorite.

“Baa Baa Black Sheep,
Have you any wool?
Yes, sir, yes, sir,
Three bags full;
One for the master,
One for the dame,
And one for the little boy
Who lives down the lane.

Not surprisingly this rhyme is all about sheep, and the importance of sheep to the English economy. Until the late 16th century the final lines of the rhyme read “And none for the little boy who cries down the lane.” It was changed to the current version in order to cheer it up and make it into a song more suitable for children.

In medieval England, the wool trade was big business. There was enormous demand for it, mainly to produce cloth and everyone who had land, from peasants to major landowners, raised sheep. The great English landowners including lords, abbots and bishops began to count their wealth in terms of sheep, with some flocks totalling over 8,000 animals, all tended by dozens of full-time shepherds.

After returning from the crusades in 1272, Edward I imposed new taxes on the wool trade in order to pay for his military ventures. It is believed that this wool tax forms the background to the rhyme. One-third of the price of each bag, or sack sold, was for the king (the master); one-third to the monasteries, or church (the dame); and none to the poor shepherd (the little boy who cries down the lane) who had tirelessly tended and protected the flock.”

This text, and that wonderful old-fashioned graphic, were excerpted from

It’s an informative, fun resource – very much worth visiting!

2 thoughts on “Nursery Rhymes and History”